get someone really to pull the wool with you, wooly bully

Circa my second sophomore year in college: kickin' it back in 2008. 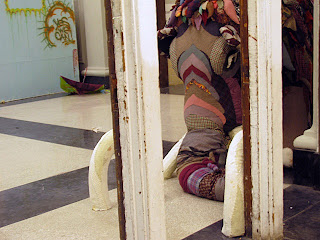 Wooly Mammoth, it was 7' tall, fabric, cardboard, duct tape, and a coupla blown glass eyes thanks to Jon. 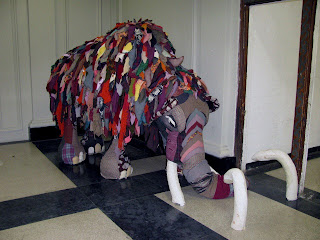 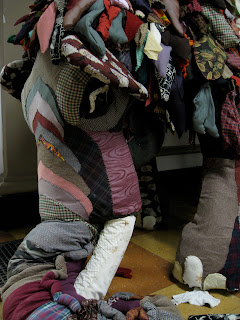 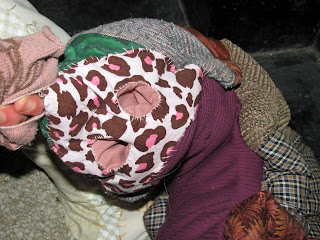 The nose holes: by far the best part.  They go real deep. 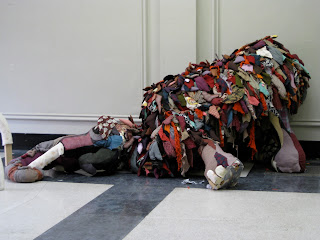 I had to move it twice and eventually it just couldn't hold itself up. The fact that the internal structure was entirely cardboard and duct tape might have had something to do with it. Fortunately it's better art that way. 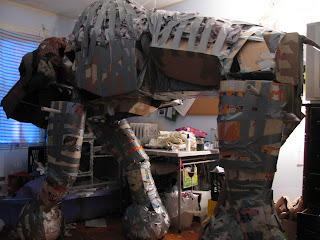 
I threw away the body just because it's a tough thing to store, and stored the head and skins in the crawl space in my mom's basement aka my personal gallery.  This semester I whipped/lugged them out and I'm planning on making some fabric flesh and bone gore at the neck and giving it full tusks.  The first step was to laminate pink foam, which rumor has it is toxic.  I thought this step was going to be more difficult than it actually was.
And now back to the present: 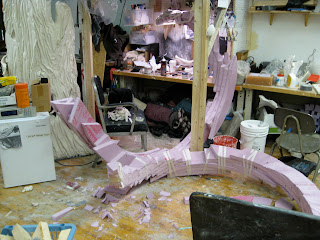 I rounded them out with a saw and a rasp which went incredibly quickly. 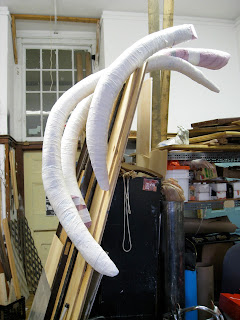 Now the pieces are covered in white duct tape (that's right, the classy kind) just because that's how I roll, real shotty like that.  I'm going to cover them in stitched fabric like the rest of the mammoth, but I was just concerned that the pink would be visible through the thin fabric and honestly I'm just real into duct tape.  I have each tusk in two pieces because it would be impossible to transport otherwise.  I'm really wising up with the whole transporting deal.
Posted by Unknown at 6:43 PM