These are getting pretty old, but have never been posted so I though I'd slap 'em up since I recently applied for a job with the Philadelphia Mural Arts Program and because I think they're the best 2D stuff I've done.  They were painted in Madison House Orphanage in Limuru, Kenya.  I volunteered there for 2 1/2 months in the summer of 2009 but didn't decide to start painting until a month before I left.  I painted each mural in four days, and since there was no electricity I had to stop at sunset. 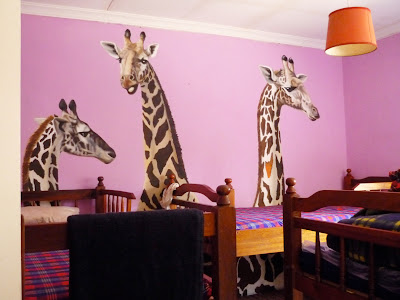 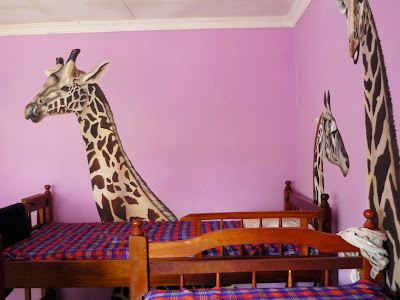 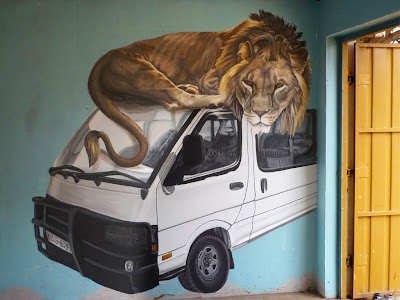 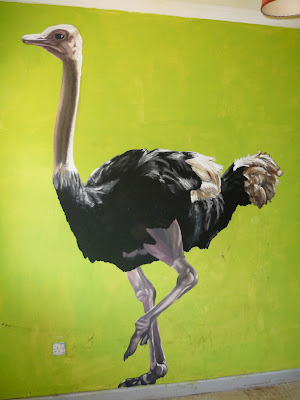 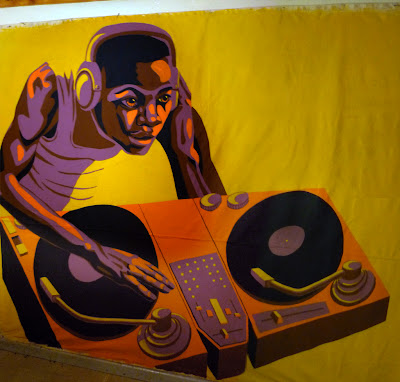 I spent June 13 - August 27, 2011in various towns in Poland, working on the following project:


"None of these extraordinary wooden synagogues survive. The Nazis burned the last of them to the ground in 1939. But, we do have excellent documentation that will allow us to reconstruct one of the most beautiful of these architectural treasures, the Gwozdziec wooden synagogue. We plan to rebuild its polychrome ceiling and timber-framed roof to 85% scale, using traditional tools, techniques, and materials.
The wooden synagogue is a perfect expression of the Golden Age of Polish Jewry during the 17th and 18th centuries. The Gwoździec ceiling and roof, a centerpiece in our presentation of the 1000-year history of Polish Jews, will extend up from the Core Exhibition into the grand public space of the Museum's modern building. The building was designed by Ilmari Lahdelma and Rainer MahlamÃ¤ki of Finland, winners of our international competition, the first in Poland for a public institution. From the Core Exhibition, visitors will look up at the polychrome ceiling, while from the grand public space of this modern building, they will look through a cutaway in the roof and see the marvelous timber frame structure within."   - Handshouse Studio

The next couple photos are of the timber framing of the log walls and the ceiling structure.  A large group of professional timber framers from the Timber Framers Guild and three groups of students worked on constructing this structure.  Each group of students worked for 2 1/2 weeks.  I was there for the final group of students, so I got to see it finished, which actually only lasted about 30 minutes because the second it was up we had to begin disassembling it to meet our deadline. 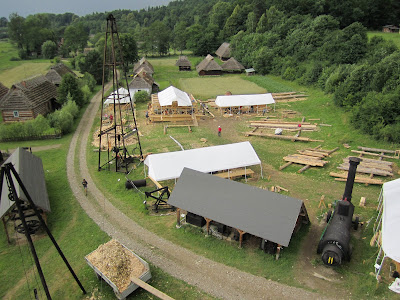 This is a view of the timber framing work site at the Skansen/The Enthrographic Museum in Sanok, Poland. 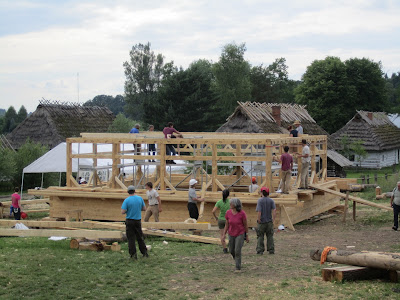 The erected log walls and the start of the ceiling.
For the second half of the project, the painting part, I was employed as a painting leader.  My job was to make sure that I was painting whilst simultaneously teaching travel groups of students, some of whom have never painted before, how to paint. This section lasted two months.  We traveled to three different very-hard-to-pronounce Polish towns - Rzeszow (pronounced: jej- off), Krakow, Wroclaw (pronounced: wash cloth) - and set up our work space in synagogues. We were trying to stay as true to the technologies of the times as possible - which meant we had to use rabbit skin glue and pigment as paint. 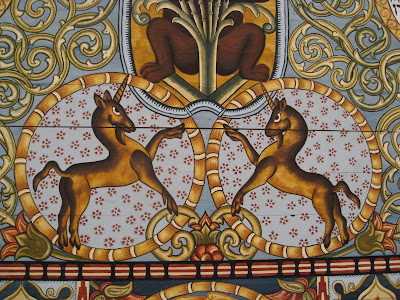 The first paintings I did were of the unicorns.  The way we would paint the animals was to look at a black and white photo (the only photo reference that remained from the past) for value, and pretty much guess which colors to use.  Granted, the guesses were based on a now-dead artists description of colors and a sort of incomplete color chart he painted. 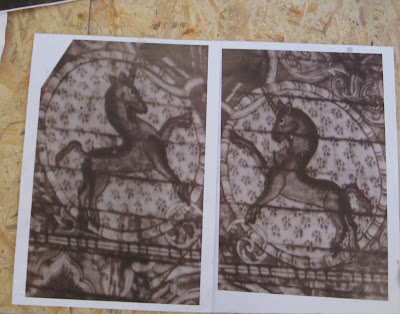 Here's the black and white photo I used for reference. 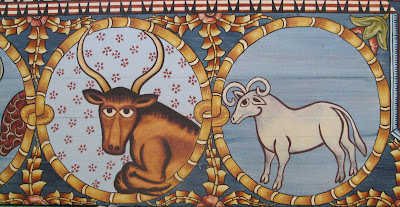 I also painted the bull, ox, and all the ropes. 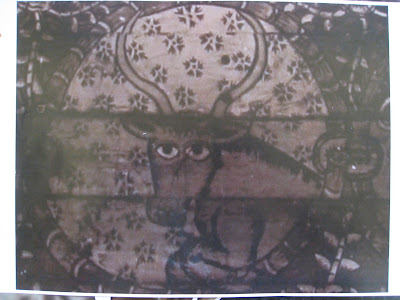 In this photo you can see how the wood of the original synagogue shifted pretty significantly. 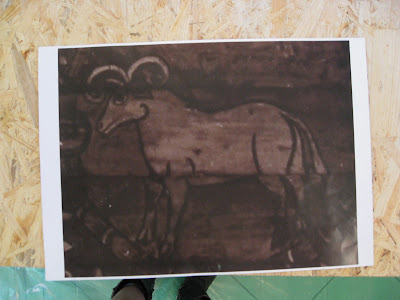 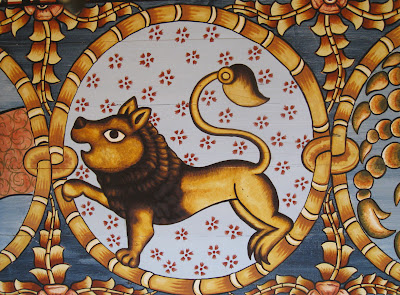 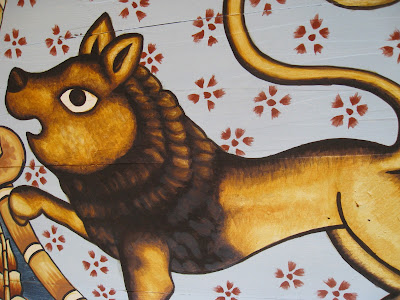 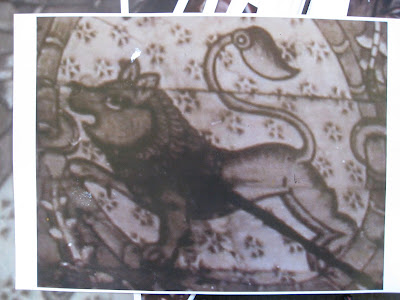 There was a wall of fourteen different kinds of flowers, with each flower occurring twice so all the painting leaders and a few students were assigned flowers just so we could be sure they'd get done.  Here are mine, with the strawberrylilac being my fave: 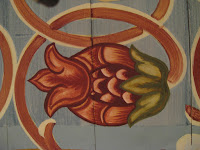 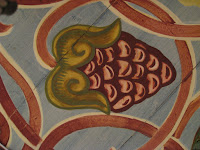 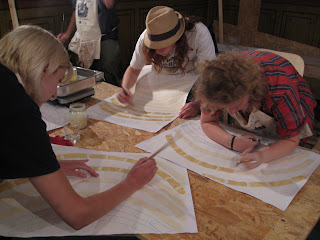 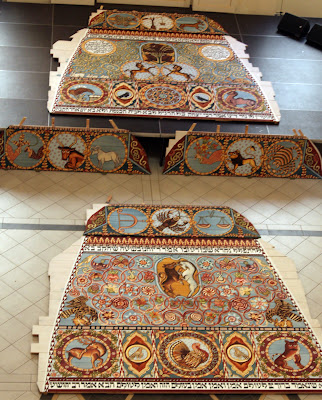 The finished sections of part of two (out of four) walls.  I go back next summer for three months to finish them all.
the timber framing blog: http://mcnorlander.wordpress.com/

the painting blog:  http://gwozdziecpainting.blogspot.com/
Posted by Unknown at 5:27 PM No comments: