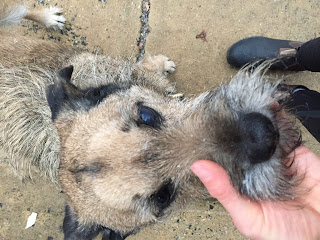 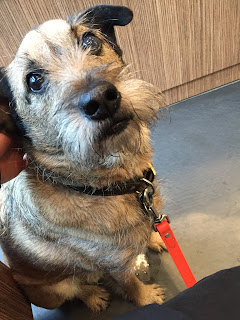 Mason at the vet before the surgery

Day of Surgery:
I dropped him off around 8am at Northern Liberties Veterinary Center and cried when doing so.  They said he was Dr. Draper’s only patient today.  The woman at the counter said she could call me after they do the dental X-rays to let me know how many teeth would need to be pulled and that put me at ease.  I was expecting three, including one tiny really loose tooth he’s had for a couple months.  The nurse who took him in the back said she should be done around noon.  At noon I had still not received the X-ray phone call so I was hoping she had finished the surgery and not had to pull many teeth at all and just did it without calling.  At 12:30 I got the call that she thought he really needed six teeth pulled.  If she was being aggressive she even could have pulled two more.  This blew me away and shocked me!  I knew his teeth were pretty bad but I’m pretty good at brushing his teeth daily.  I got extremely anxious because he didn’t have that many back teeth to begin with and I thought he would never be able to eat kibble again.  I thought his life would change more significantly with that many teeth being pulled than losing an eye he was already blind in.  She said there was significant bone loss around the teeth because of pockets of infection that ate away at it. He had to get two teeth pulled on the bottom and I thought all his bottom teeth looked great.  All of the teeth were molars or carnassial teeth – large teeth with three roots.

I got a call from the vet at around 2:45 to let me know his surgery was completely finished. He was just starting to wake up from anesthesia and was looking around.  That was a relief.  The vet said he did great and handled being under anesthesia for that long well.  They wanted to watch him for a little while longer and I could pick him up at 4.

When I picked him up he was pulling on the leash to get to me and was wagging his tail a little.  On the walk to the car he crashed into walls with his cone a lot trying to sniff them.  His walking was slow and seemed a little off, too.  When we got home he was mildly happy to see my boyfriend – wagging his tail just a little again.  Many of the blogs I read about eye removal recovery said their dog was so happy to see them and didn’t seem any different when they picked them up after surgery.  Unfortunately, this was not the case for Mason. 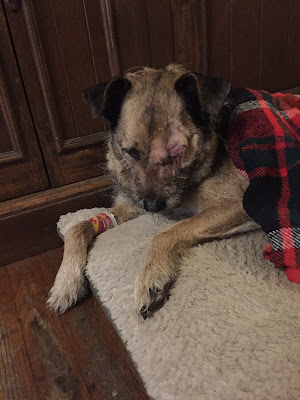 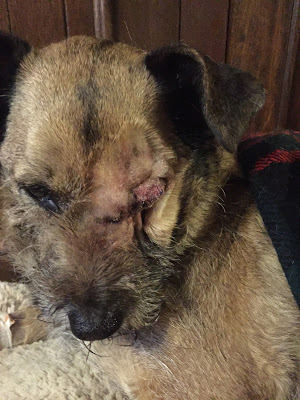 His face has a lot of extra skin so those wrinkles are normal, normally just hidden under his fur. 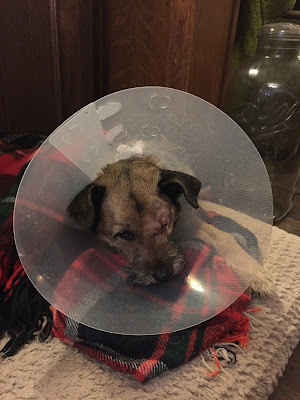 At home I fed him his new canned food and he scarfed it down! He hadn’t eaten since the night before so I’m sure he was hungry.  It made me feel better that he was interested in eating his food. The vet recommended I give him half what he normally would eat, wait 2 hrs to make sure he kept it down, and then give him the other half if he readily ate the first half.  He ended up eating both halves. I gave him his antibiotic and pain pill with peanut butter and he drank an obscene amount of water.

I sat next to him and pet him for a couple of hours.  I couldn’t tell if he liked it or not.  He never wags his tail when you pet him and the only way you know he likes it is if he paws at you to continue or moves his front leg so you can reach his belly better.  He did move his leg a little for me to scratch his belly, but he wasn’t acting like he normally did.  Also, I don’t know if it’s because he only has one eye now or because his good eye is a little droopy from the anesthesia or pain meds, but he looks a little pissed off all the time now.  Usually his token look is “concerned”.  He also is doing a lot of grunt-sighing.  He would sigh pretty regularly before, but this is different.

He wouldn’t sleep, which was very weird for him.  Sleeping is his #1 favorite activity.  He looked really tired and I would see his eyes get heavy and just when I thought he would fall asleep he would change positions. My boyfriend thinks its because the last time he fell asleep he woke up with six less teeth and one less eye and he didn’t want anything like that to happen again while he was sleeping.

I took him out to pee without the cone.  He sniffed a little and he peed quickly and then led me back to the house.  Normally, he’s very picky about where he pees and will take forever to find “the perfect spot”. When I took him out to pee before bed we were crossing the street and a cat was crossing the street at exactly the same time only 10 feet from us but he didn’t see it because it was on his no-eye side!  That made me feel pretty sad for him.

I was told by the vet that I can take his e-collar off him if he’s being supervised and I’ve been doing that.  He has no interest in scratching or pawing at his eye, but I put the cone on when I leave the room just in case.  He definitely prefers it off.

I also spent the evening making him a soft e-collar.  It was good to take my mind off the pain he was in and it made me feel like I was doing something to help him. He really hated the plastic cone the vet gave him and I couldn’t imagine him getting any sleep in it.  I went to Petco before to buy wet food and the soft cones there were $40! I wasn’t about to spend that on something he would only need for a week after dropping the money I did on his surgery.  I used the plastic cone as a pattern. I made the cone out of canvas, some bias tape, cut up plastic clothes hangers and velcro.  I ran the bandana he usually wears through the loops to tie around his neck because it was soft and thick and probably wouldn’t dig into his neck. I don’t think it bothers him to wear it. 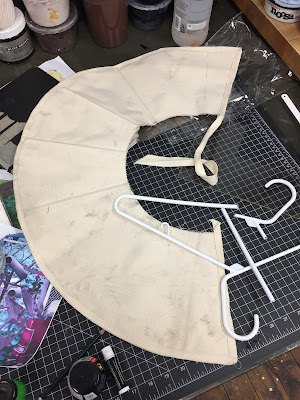 The e-collar in progress.

He slept on his bed on the floor by our bed the first night.  We didn’t want him in the bed because he isn’t supposed to jump and we didn’t want to bump him in the face by accident in our sleep.  He seemed to sleep through the night.

Day 1 Post op:
I got up while he was still lying in his bed and went to the kitchen to prepare his food.  I was so happy to see him walk into the kitchen wagging his tail.  He ate his food quickly again.  He still has an odd walk, like a limp.

He’s been sleeping a lot today.  He left his bed to come sit on the couch with me, which is something he normally does, so that was good.

He was very happy when my boyfriend got home.  He let out one small bark (usually he barks a few times when people come to the door) and got up off the couch to greet him and was wagging his tail a lot.  That was reassuring.  But shortly after that he vomited just a little bit.

He woke up in the afternoon from sleeping and I took him outside.  When he got off the couch I discovered he had some poop mooshed under his tail.  He still hasn’t had a bowel movement, but the vet said it could take 24 hours because of the anesthesia .  This time he led me around the whole park we live across the street from, and his ears perked up when he saw a squirrel.  He is still walking slow but normal now.  When we got back inside I cleaned up his butt and then when I went to put on the e-collar he had a nice long  grumble about it.  Then he seemed like he was going to vomit again and he probably swallowed some. 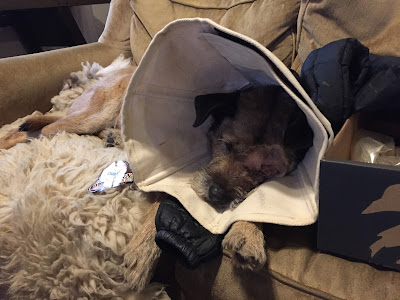 
Late afternoon was a huge turning point for Mason: He pooped (after almost 48 hours) and more importantly he seemed like he was himself again! We had a couple of friends visit and he got up to bark at them when they were at the door, and then seemed very happy to see them! Whole hearted tail wagging and everything!  His good spirits lead us to give him some roasted chicken from our dinner, which we NEVER do! I went to bed feeling so much better about this decision after seeing his personality come back for a few hours. 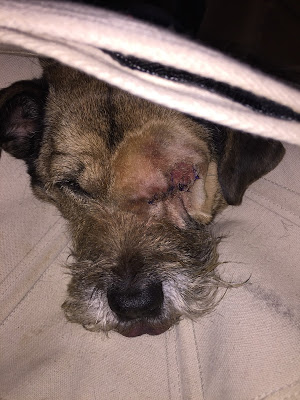 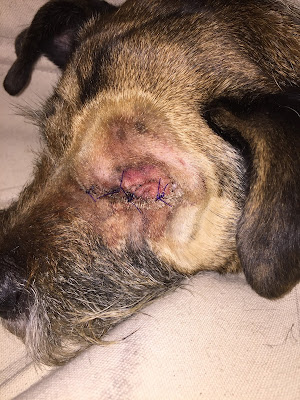 Mason's eye is very red, has some swelling, and you can start to see the development of a massive bruise that takes up almost all of the shaved fur area 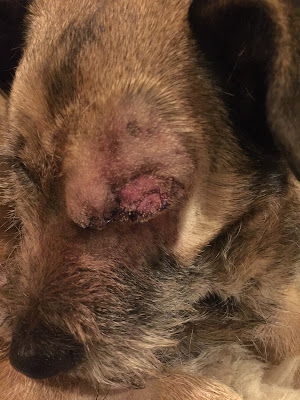