I'm happy to say that Mason is mostly back to being himself now.  He definitely ebs and flows in his healing.  After the second day's evening personality spike, he was back to being a little less himself the following morning.  By day four he is mostly back to how he normally is.  I've been giving him the maximum dose of pain killers every 8 hours throughout this time.  The vet thinks that's what could be upsetting his stomach, although his grumbly stomach and wet burps are getting less and less frequent at this point. He's had 3-4 instances of having a really small amount of poop slip out under his tail.  The vet said this is because the pain killers might be relaxing his muscles a little too much.  I've also noticed his nose is dripping clear liquid pretty often.

One thing I've noticed now that he's had his left eye removed is that when I'm walking him on the leash and I go to turn left I will often times end up tripping over him because he can't see my body language.  Although this has happened to us on walks a few times before, it's happening more now. This leads me to believe that he still had some, even though it was definitely very poor, vision in that eye before it was removed. 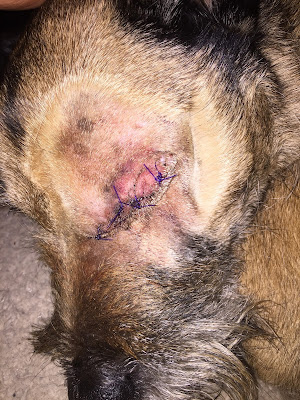 On day 2 his eye is still very red and bruised. 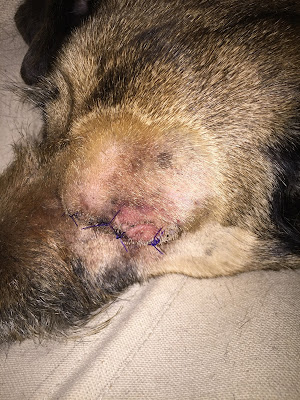 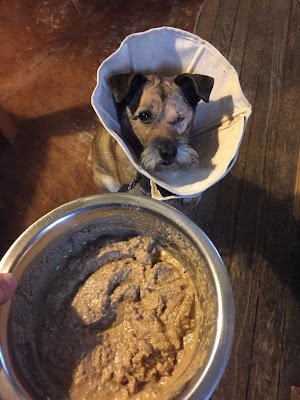 On day 3 he is still very happy to eat his textureless wet food. 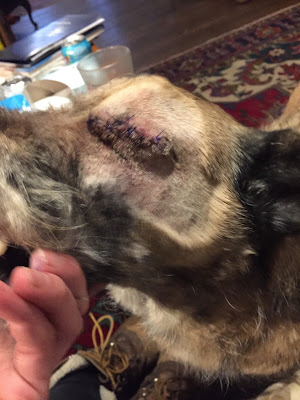 On day 4 it looks like the redness is slowly subsiding.

As for my feelings, I have gotten over feeling so bad for being the cause of his current pain.  We ran into a dog-buddy of his in the park and the owner immediately said he was sorry about the eye.  And later I was thinking just how not sorry he needed to feel about it.  Mason will be in less pain in the long term than he was with the eye and teeth.  I also feel like he's still just as cute as he was before his eye was removed.  This is pretty superficial, but I wasn't positive I would feel that way.  He was a remarkably hansom dog (this has even been verified by every vet he's seen - and they are professionals!).  I am just happy he can stare into my eyes for an awkward/uncomfortably long time and I still have an eye of his to stare back into.