I know a lot of people don't get down right personal and talk about money, especially the exorbitant amount of money they just spent on a small animal.  Well, I'm about to reveal it all: exactly what I paid, estimates from the vet, estimates from the ophthalmologist/specialist. To be clear, the year is 2018 and the location is a city: Philadelphia, PA.

Mason's eye removal surgery, teeth cleaning, and 6 teeth extraction ended up costing me $2,139.71.  Ouch!  Just to be clear, I expected it to be $1000 less.  Not because the vet quoted me incorrectly, but because I didn't think Mason's teeth were that bad.  The estimate I got from my normal vet for eye removal surgery alone was $1,507.  If I were to get his teeth cleaned and 0 teeth pulled it would have been $500.  If I got his eye removed and teeth cleaned at the same time it would be $1,300 if 0 teeth were pulled.  Whaaaat? The teeth cleaning would basically be free and the eye removal would be $200 less? Can that be?? Yes, yes it can.  It has to do with anesthesia packages.

I spent another $270 for the histopathology (dissection) of the removed eye. This will tell me if he had primary or secondary (in this case, caused by his untreated mature cataract) glaucoma.  If it is primary, he will be started on glaucoma-preventing eye drops immediately.  If it's secondary, we just keep a good watch on his good eye.  I didn't want to spend $270 on his dead eye, but the ophthalmologist highly recommended I get this done and she wasn't making any money off that recommendation.

At my vet, a regular teeth cleaning with no extractions would have cost $500.  At Mason's previous vet, they quoted a teeth cleaning at $1,200! Make sure you shop around a little.  It's amazing and fortunate that pet healthcare costs can be broken down so efficiently into estimates - it is not like that for people at all!
A good amount of this surgery price was the quantity of teeth he had to get pulled, and more anesthesia time. The price of extractions depends on the number of roots the teeth has, the more roots the higher the cost.
1 root - $58, 2 roots - $68, 3 roots - $104, carnassial tooth - $112

I paid so much more than I ever thought I would spend on a pet.  But if Mason even lives for one more year it will all be worth it... but he better live to be 18 since it cost that much......


Here were the other estimates I received from Mason's ophthalmologist:

Intravitreal Injection:  $350
This is the least expensive and least invasive choice.  An injection in the eye destroys the cells that produce fluid in the eye.  By decreasing the production of fluid, the intraocular pressure should remain permanently low.  It's done during an office visit with local anesthetic.
I didn't choose to go this route because my ophthalmologist said that many owners who do this to a otherwise healthy dog end up having problems in the long run, but their dog will be to old/unhealthy to get it removed later. 50-90% (Ophthalmologist said 75%, vet said 50%, internet says 80-90%) who get this procedure will get phthisis bulbi (shrinking of the eye), which looks pretty nasty. Since the eye is still there, it can still become injured (it's blind, so the dog could bump it) and it could still get cancer or other diseases of the eye. In some instances more than one shot is required which really bumps the price up.

The ophthalmologist had me do a google search of "Phthisis bulbi" and she told me which images were actually it, because many inaccurate images come up in the search. 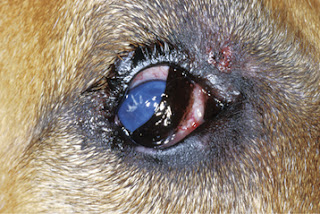 Enucleation (eye removal) with histopathology (labratory testing of removed eye: $2,300 - $2,700
This could have included a prosthesis put in the empty eye socket to "fill" it before they sewed the eyelid shut.  My ophthalmologist used to do this to all her patients but since a few patients have rejected the implant years later she stopped making it standard procedure.  This prevents the caved-in look.

Evisceration with Orbital Prosthesis and third eyelid flap:  $2,900 - $3,500
This is when the inner eye is removed and replaced with a black ball, but the outer shell of the eye, eyelids, third eyelid, and all muscles remain intact.
I didn't go this route obviously, but I did think about it.  This is the most "normal" looking option but it's also the most painful and relatively high maintenance.  Many of the dogs with this procedure will require moisturizing eye drops eventually. Mason's ophthalmologist said the only reason the price is higher for the prosthesis is because the dog will need to be on intravenous pain medicine for an entire day.  One of the vet techs even leaked to me that one woman who had this done to her dog was calling after a month asking if it was okay that her dog was still crying and moaning! In the end, prosthetic eyes are for you, not your pet. 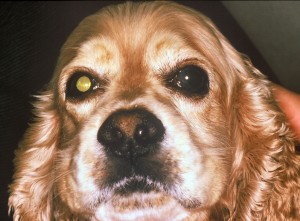 The eye on the right is a prosthetic eye.  Source

Glaucoma and Cataract Laser surgery were also options, but I didn't receive an official quote since the ophthalmologist said they would be around $4,000 - $5,000.  That is way out of my budget, especially for a procedure that is not 100% successful. 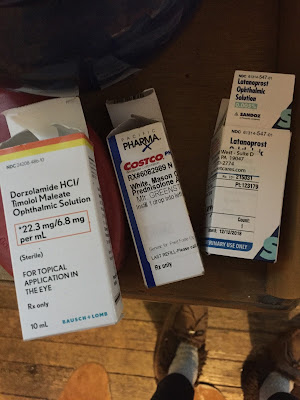 Management for comfort with topical drops
This is only feasible for up to two years if you are lucky.  Human glaucoma drops stop being effective on dogs rather quickly.

I went through my receipts and I spent about $455 on ophthalmologist visits and just about $230 on prescription eye drops in two months.  I also bought two bottles of Ocu-glow at $75 each.  That brings my management total to $835 for around two months!

Pet (and people without insurance) prescription cost tips:
Go to Costco if you have one near you!!! You don't need a membership to get huge (50% for me) discounts on prescriptions!

Walgreens also has a prescription program where you pay a $20 yearly membership fee and can get a certain % off prescriptions.  It's called Walgreens Prescription Savings Club.  I don't remember exactly, but I believe if I joined the club I would've got Mason's $120 prescription for $90.